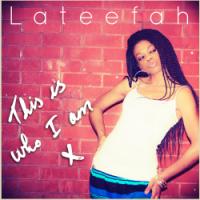 A fresh beat from the Soul Singer set to make a second music hit!

“This is who I am” brings a bass fueled, revival to the soul scene. Produced by talented young producer KING for Lateko Records, it will be released July 14th.  Lateefah’s debut single “Here I am” held the number one spot for three weeks on the Reverbnation Christian chart for St. Lucia and also for a period of one week was number one on all genres chart. The single also reached #27 on the National Airplay Top 50 Gospel Chart (US) in December 2013 sharing the spotlight with notable artists such as Mary Mary, William McDowell, Donnie McClurkin and others.  Her second single release “Love Me Through” was well received by the media and already performing live sessions with some of the top radio stations such as Premier Radio and top venues such as The Vortex, she is one to follow.

Listen to ‘This is Who I Am’ here: https://soundcloud.com/lateefahsings/this-is-who-i-am

London Born musician, Lateefah is a neo soul artist who after returning to the UK from her parent’s native country of St Lucia, is now working on further developing her gift for making music. Her new single releasing this year, will hope to demonstrate the talent and efforts of this young neo soul artist.

The cool Caribbean Artist started out singing in church at a young age, and gathers a lot of the inspiration for her work, from her own personal diaries from her childhood. Adapting these written records of her past, Lateefah has been able to create moving and soulful songs that entertain and educate her listeners about her colorful past.

Lateefah developed her passion for singing from early on as 3 years of age! Her earliest memory of being driven by the art, was trying to hit the right notes in the song “The Lord is my Shepherd”.  Rehearsing relentlessly, until she hit it with pitch perfect precision. After that success and a great deal of extra practice, the music industry became a second home for the young superstar. The music blood has been in Lateefah’s family since her father founded the 70’s Reggae band, Cygnus.

Along with the Single, you can also get a FREE download of the track “Here I am”: http://latekorecords.com/lat-s-music